Arbtech was contacted by a client that needed a bat survey to support a small-scale development in Hook, Hampshire. The client was aware that bat roosts were present in the area because a large bat hibernation site was located in close proximity to their site. The likelihood of bats roosting in their building was therefore high. As bats are a material consideration in the planning process, a Preliminary Roost Assessment (PRA) survey report would need to be submitted as part of planning.

The proposed development was for a single-storey extension of the existing Grade 2 listed building to create useable living space within the family home. This would involve modification of the roof structure including removal of roof tiles. As bats are known to roost under roof tiles, these would need a close inspection by an ecologist to determine whether bats were present. 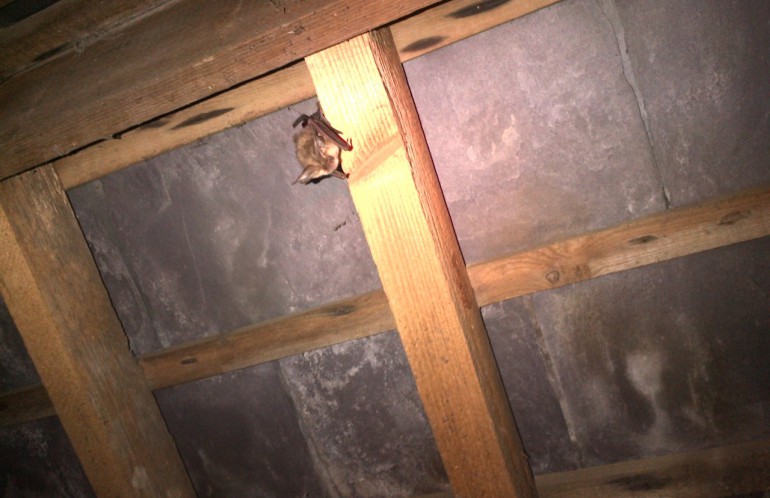 PRA surveys are carried out by licensed ecological consultants as it is an offence to disturb roosting bats. The Arbtech consultant attended the client’s property and carried out an internal and external assessment of the building. This involved entering loft spaces within the building to search for evidence of bat activity.

Signs which indicate a presence of bats include droppings and feeding remains in the loft space, urine and fur staining on structural timbers. An absence of these as well as lots of cobwebs throughout a loft space can indicate an absence of internal flying activity by bats. Bats also roost externally on buildings beneath roof tiles and timber cladding, as well as other features. As such, it is not always possible to rule out bat occupation within external features.

The results of the physical survey are analysed against a desk study. Here, the consultant looks at the nearby landscape features that are used by bats, such as commuting routes and foraging resources, as well as historical records of nearby bat roosts and sightings. The data are used to support the consultant’s conclusions with regard to the likelihood of bats being present nearby or using the noted roosting features on a building or tree.

For this site, the desk study indicated that there were nearby commuting and foraging features as well as a substantial bat hibernation site in close proximity to the development site. The desk study also showed that a nearby bat maternity roost had recently been destroyed under a granted licence from Natural England. These findings supported the conclusion that bats were highly likely to be roosting nearby or in survey building.

The internal inspection of the loft spaces revealed evidence of bat activity in the form of a small number of bat droppings on the floor of a small loft space. This indicated that void dwelling bats were roosting in the building.

The external assessment of the building found that bat roosting features were present on the building where the proposed development would be. The features consisted of a small number of raised tiles that crevice dwelling bats could roost in. Due to the high likelihood of bats roosting externally on the survey building, bat emergence and re-entrance surveys were recommended to characterise the bat roosts in the building.

Do You Need a Hampshire Bat Survey?

Arbtech carries out bat surveys in Hampshire all the time and it is one of our most in-demand areas. If you have a project in the Hampshire area that needs a bat survey, or other types of ecology survey, then please get in touch today and we’ll send you a free quote within 24 hours.

To receive your fast quotation, you can contact us through the form on this page or you can call our head office on 01244 661170.