Arbtech were contacted by a local housing association who were about to replace the roof on some flats to bring the building up to building regulations requirements. This activity does not require full planning permission therefore no initial bat assessment was carried out before the work started.

The scaffolding was up, and all new roofing materials were already on site.

One of the residents had informed the housing association that they had concerns about bats in the building, and so Arbtech were called in to assess the situation.

Although this is not for a planning application, Arbtech are often contacted in situations like this to ensure no breach of legislation occurs during roofing works.

Steyning is a rural town in West Sussex surrounded by the South Downs. A few miles south of Steyning are the coastal towns of Shoreham by Sea, Worthing and Brighton, with small rural villages to the north, west and east. The River Ardur runs through the village of Upper Beeding close by to the east.

The local landscape provides excellent foraging and commuting resources for bats and other wildlife.

The survey process was the same as would be carried out for a normal preliminary roost assessment that would be needed for a planning application. Natalie carried out a systematic search of all areas of the building, including a thorough search of all loft voids, and all roof structures.

The building was in very good condition structurally, and the loft voids had no visible access points through which bats could get in.

There was no evidence of bat use such as droppings or urine staining around the features.

The building was assessed to have low habitat value and only a very small risk of bats being present. This assessment follows Bat Conservation Trust best practice guidelines. 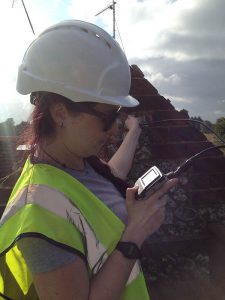 As the re-roofing work was set up and ready to go, only delayed by the unexpected need for the bat survey, it was not considered reasonable or proportionate to recommend dusk or dawn surveys. As the features present were so low in number and were of low value (i.e. only suitable for very small numbers of common species), and no evidence was found, it was assessed that a precautionary working method would be sufficient.

This is only an appropriate way forward when the risk to bats and bat roosts is acceptably low, and it would be unreasonable to delay the job until the summer when further work can be carried out.

This approach is not usually acceptable for the purposes of planning and development and requires robust scientific justification.

The works went ahead without any further issues and no bat roosts were impacted.