A local resident got in touch with Arbtech after the South Downs National Park Authority asked them to have a bat survey carried out to support their planning application. The proposal was for an extension which would impact the existing roof structures.

Although small in scale, householder developments such as these still risk impacting bats and bat roosts, particularly in rural areas. Impact to bats should be considered at the start of any planning application.

Lavant is a small village just outside of Chichester within the South Downs National Park. Goodwood racecourse is close by, attracting thousands of tourists visiting the area for races and festivals. The area boasts stunning scenery with ancient woodland, pastures and hedgerows.

Two of the UK’s rarest bat species are present locally; the grey long-eared bat and barbastelle bat. These species are reliant on undisturbed, undevelopped habitats and are particularly vulnerable to human impacts such as artificial lighting. 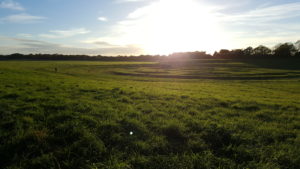 A preliminary roost assessment or ‘PRA’ can be undertaken all year round. The surveyor will inspect the interior voids of the building such as lofts and cellars for evidence of bat use and will inspect external structures for suitable roosting habitat and access points.

The house was inspected by our locally based consultant, who found evidence of bat use in the loft in the form of bat droppings, and identified external features that could be used by crevice dwelling bats; in this case raised roof tiles and gaps under the eaves.

When bat evidence is identified, or suitable roosting features are present, further surveys are required to identify which bat species are present, in what number and how they are using the building and wider site.

Three further surveys were carried out, one at dusk and two at dawn and a static bat detector was placed in the loft for the duration of the survey period. The surveys need to be undertaken between May and September when bats are most active, and should be spaced several weeks apart.

The surveyors were positioned around the building with bat detectors to observe all bat activity and identify any roosts in the building. In this case one of the elevations of the building could not be properly seen, which is why the static bat detector was deployed in the loft to add an extra level of certainty to the survey results.

The bat droppings from the loft were sent off to a laboratory for DNA analysis, which confirmed the species was brown long-eared bat.

The surveys identified common pipistrelle roosts that would be retained and not impacted by the development. It was concluded that the droppings in the loft were deposited by a brown long-eared bat on a single exploratory visit and was not considered a roost as no emergence or re-entries were observed and no echolocation was recorded by the static bat detector in the loft.

There was commuting and foraging of several bat species within the garden and along the site boundaries. Common and soprano pipistrelles were regularly recorded on site, and noctule and myotid bats were also heard.

Once the surveys had been completed and the accompanying report submitted to the planning department, the application could proceed with no further work required for bats. The client was advised that if any bats were unexpectedly found during the development then work must stop and Arbtech will need to contacted for further advice.

Our senior ecologist Natalie is based in Chichester West Sussex, also covering East Sussex, Hampshire and Surrey. Natalie has been part of the Arbtech team since 2013 and specialises in protected species and habitat surveys. Natalie carries out a large proportion of her work within the South Downs National Park and AONB and the surrounding areas and brings her specialist local knowledge to all of her work.