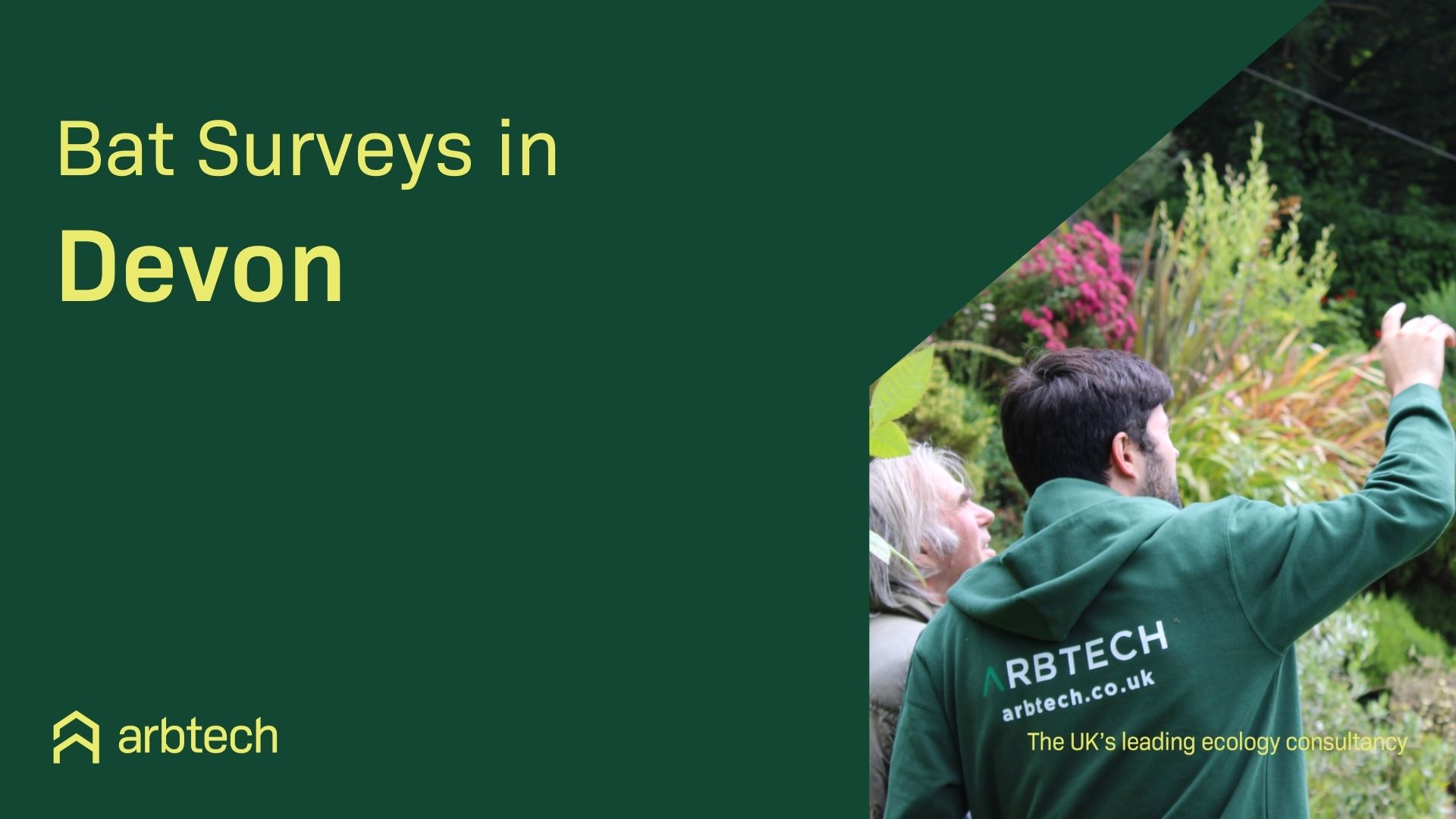 A rural county in the South West of England, Devon has it all: sandy shores, coastal cliffs and hilly landscapes. The county is home to two National Parks, Dartmoor and Exmoor, and the English Riviera, known for its almost sub-tropical climate. As if that wasn’t enough, in North Devon. you can find the UNESCO Biosphere Reserve.

Even though the county contains two National Parks, Devon only has roughly 12% canopy coverage from trees, which is quite a lot less than the national average. With that said, this doesn’t stop a wide variety of wildlife taking up residence. Species like tree creepers, woodpeckers and nuthatches use holes in the trees as nesting sites, while brown long-eared bats and pipistrelle bats also use these holes, and small crevices.

Dartmoor National Park is a vast, open moorland (the largest open space in southern England) defined by thick forests, meandering rivers and wetlands. Here, conservation work such as the overall conservation of habitats is routinely undertaken to support research and observe both protected species and their habitat. Current and past research includes the bog fly, blue ground beetle, moorland birds and the barbastelle bat.

How can I get involved with bat conservation in Devon?

The Devon Bat Group play a key role in the preservation of the county’s bat species, even for any with favourable conservation status. The aims of the group encompass protecting bat roosts whilst maintaining and enhancing their habitats within gardens and homes.

They also rehabilitate injured bats and educate people about the species concerned with depleting population numbers and their requirements. Some members also build bat boxes for the bats to roost in. They have recorded 16 species of British bats out of 18 for the UK as a whole.

Some of these bat species include the Nathusius pipistrelle bat, lesser and greater horseshoe bat and the grey long-eared bat, all of whom enjoy the South West’s mild climate and diverse landscapes.

The Nathusius pipistrelle in particular is a rarely recorded UK bat species. Similar in appearance to the common and soprano pipistrelle, although slightly larger, the fur on the Nathusisus pipistrelle bat is often longer and paler. They emerge from bat roost sites at dusk and hunt along woodland edges and over water.

The lesser horseshoe bat is one of the UK’s smallest bat species. Roughly the size of a plum, when resting, it hangs with its wings wrapped around its body. These bats emerge around half an hour after sunset. They fly close to the ground and circle over favoured areas.

Like the lesser horseshoe bat, the greater horseshoe species hangs with wings enveloping their body. They are easier to spot as they don’t hide in crevices – it’s also one of the largest UK species, similar to the size of a pear.

They emerge around half an hour after sunset but are usually only out feeding for about an hour, then return to their bat roosting place until dawn, when they will venture out to feed again.

The greater horseshoe bat often behaves like a flycatcher bird; they watch from a consistent feeding perch and take insects in flight or sometimes from the ground. The grey long-eared bat has only been found in southern England.

It’s medium-sized with ears almost as long as their body. They emerge in complete darkness and are an accomplished flyer. A woodland species, the grey long-eared bat frequently hunts by picking up insects off foliage rather than in mid-flight.

Why does any of this actually matter?

Bats are a protected species under habitats and species regulations within the Wildlife and Countryside Act 1981, which makes it an offence for anyone to deliberately capture, harm, handle or kill a bat, possess a bat whether alive or dead, disturb a roost or offer or sell a bat without a relevant class licence.

With this in mind, if you’re planning to do any work on your house, fell a tree or replace a roof, it is vital that you get a qualified ecologist to carry out a bat survey, starting with a Preliminary Roost Assessment (PRA). Although you may believe that bat surveys are a universal assessment, they are in fact separated into two separate stages.

Within the overall bat survey process, a PRA is the first stage and consists of an ecologist visiting the site and conducting a general scope of the suspecting bat roosting place (or places).

At this point in bat surveys, the ecologist will look for evidence of roosting bats such as as droppings, (these look like mouse droppings but crumble under pressure), remains of prey and small holes and cavities a bat could crawl into and shelter.

If these signs are visible during the bat survey, this will then prompt a Bat Emergence and Re-Entry Survey (BERS). A BERS is the second stage of a bat survey and involves the ecologist observing likely bat roosting sites at certain times between dusk and dawn to observe whether there are any bats coming or going from specific bat roosts in their natural range and gain further information about the bat species present on the site.

Upon completion of both bat surveys, you will be required to support your planning permission with a report of the results and supply them to your local council. Depending on the outcome of the bat survey – or bat surveys – our ecologists will provide you with effective advice via an impactful mitigation design.

Using this approach, they will be able to identify methods to safely avoid impacts on the bats that would otherwise obstruct access to the site, enabling your development project to progress past planning with the corresponding planning authorities.

So you need a Devon Bat Survey. What next?

If you’re looking for advice on bat activity surveys or more information about further surveys, why not give our expert ecologists Chris Formaggia, Jonathan Studdard, Joe Slade or Dr James Fielding (based in Exeter) who undertake surveys a call to discuss your project?

They all live and work in and around Devon, giving them an insightful understanding of the statutory authority of Devon County Council and relevant legislation, as well as broader considerations such as DNA analysis, European legislation, Natural England and the habitats and species regulations.

Our ecological consultancy offers multiple different services across the United Kingdom, so if you need a help with arranging bat activity surveys, further details on how our ecologists undertake bat surveys, or anything else involving European protected species or valuable plants, get in touch today.

Where in Devon are you based?

Our leading bat expert in the southwest, Dr James Fielding, is based in Exeter.

Do you cover all of the southwest?

Absolutely. We have boots on the ground in Devon, but also in Dorset, Somerset and Cornwall.

Is a bat survey in Devon any different to one elsewhere?

Not really. Have a look at our bat survey page and watch the videos if you want to learn more about bat surveys in general: https://arbtech.co.uk/protected-species/bat-surveys/