As an Ecological Consultant you never know what you are going to find when completing surveys. Whilst completing reptile surveys at a site I noticed bat droppings stuck to a window of a building. The building is covered in timber weather boards with several gaps around the windows, doors, and the boards themselves.

On closer inspection there were also droppings stuck to cobwebs inside these gaps. As I pulled at the dropping to complete the ‘Crumble Test’ to make sure it was bat and not mouse droppings, a cluster of droppings came out with the cobweb. Further droppings were also located along the same elevation, stuck to the weather boards beneath gaps.

As we had already booked in a single bat emergence survey on this building my immediate thought was that we need to increase the survey effort as this building has been used as a bat roost. The droppings were small and tapered at the ends – suggesting pipistrelle species. Although the droppings did not appear to be fresh, being pale brown in colour, their location results in exposure to the elements therefore an accurate age of the droppings could not established.

The following week I returned to conduct the next reptile survey. This time armed with a torch to inspect the gaps in the timber weather boarding for any fresh evidence of bats.

A fresh dropping was found on a weather board beneath a gap.

On shining the torch into the gap a small Soprano pipistrelle stared back at me. 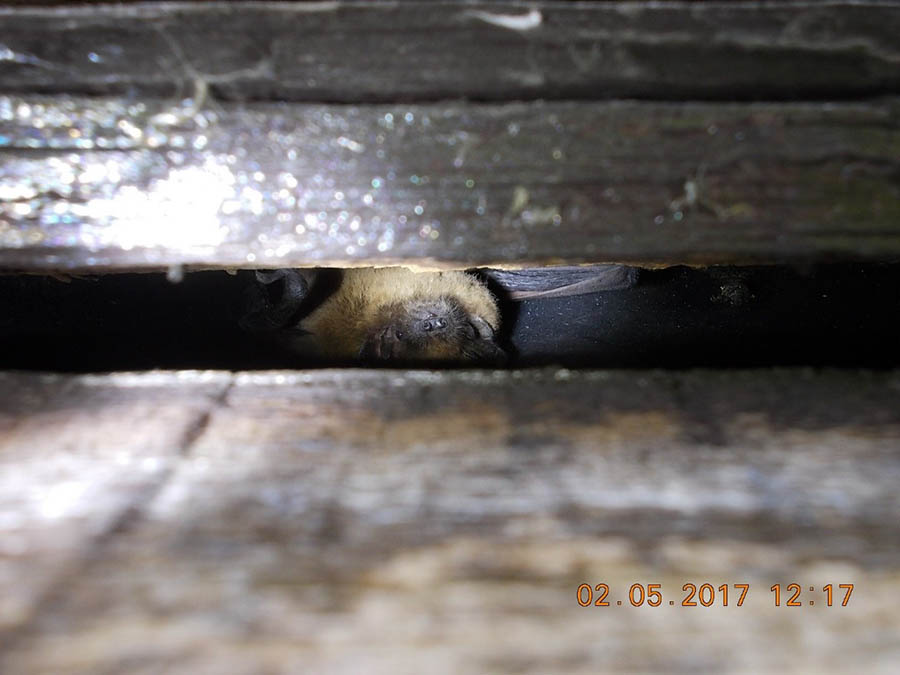 Working carefully along the entire elevation large clusters of droppings were located caught in cobwebs, along with individual droppings stuck to ply boards behind the weather boarding. 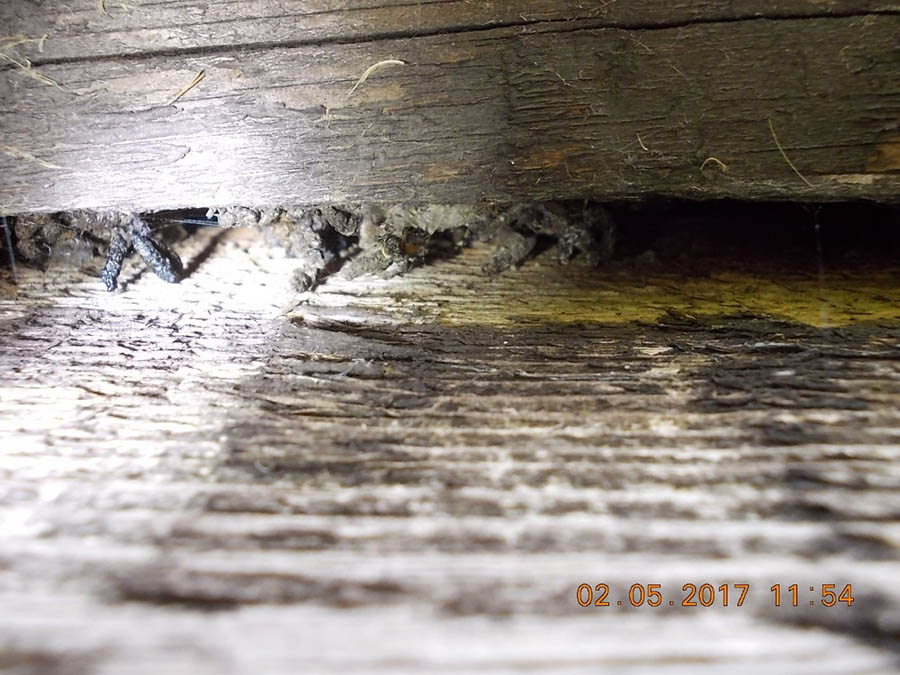 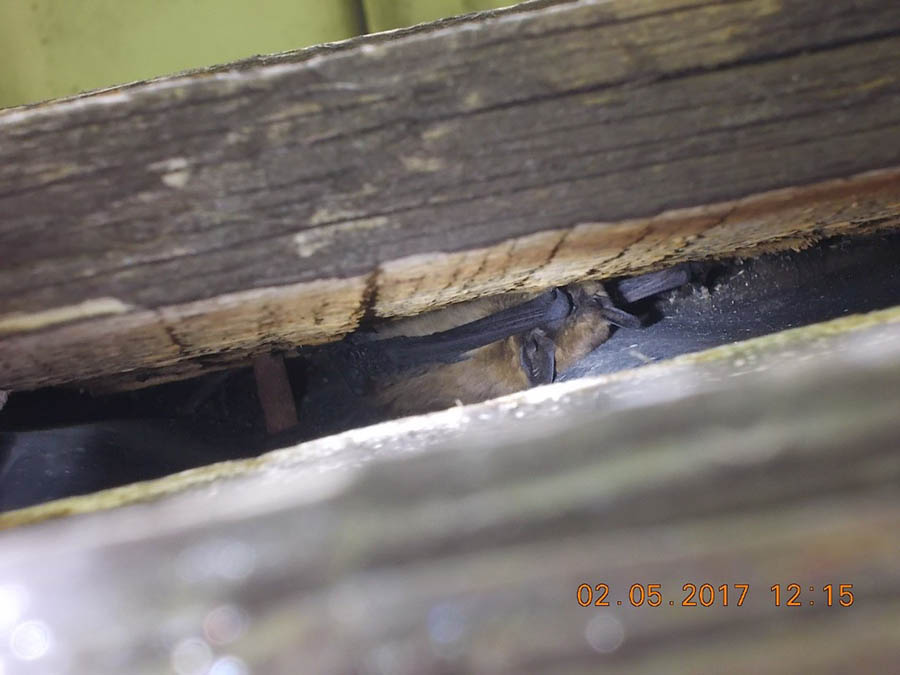 …and then a cluster of approximately seven! 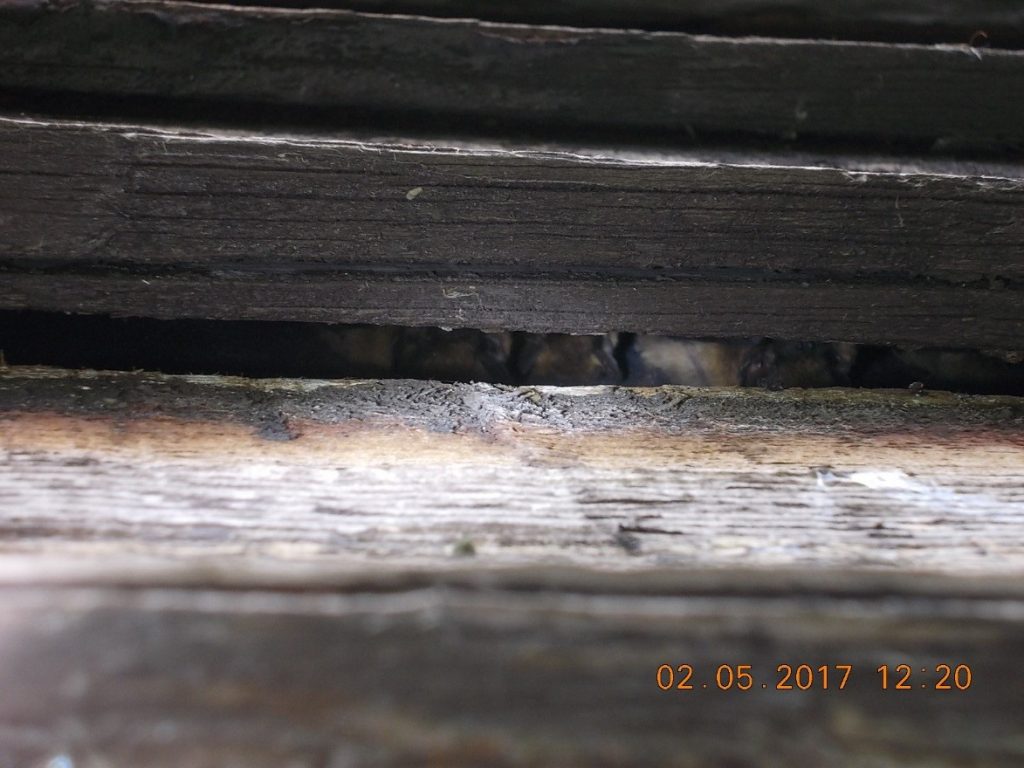 The site is ideal for a maternity colony with several ponds, woodland, and rough grassland all providing key foraging areas for this species. Considering a single pipistrelle can eat 1000 midges a night there is definitely adequate invertebrate prey available.

Our client was provided with the photographs of the droppings and bats found and advised of the next steps.

We are now increasing the survey effort to comply with national guidelines (Bat Conservation Trust: Bat Surveys for Professional Ecologists Good Practice Guidelines 3rd Edition). These surveys will be timed to confirm the presence/absence of a maternity colony so that appropriate mitigation and compensation can be included in the report.

Once planning is granted we will assist our client with obtaining a European Protected Species Mitigation Licence from Natural England to ensure that the development can progress without having a detrimental effect on the favourable conservation status of the Soprano pipistrelle roost present.

No reptiles found on site yet, but there are still several more surveys to do, so who knows what I will find during my next site visits… watch this space…

Jo joined us in 2012, as a licenced ecologist, having been a sub-contractor for almost 2 years previous. Jo is a highly accomplished bat surveyor and acts as our specialist on bat mitigation and other European protected species licence applications. Jo has had over 200 licence applications granted during her time here at Arbtech!