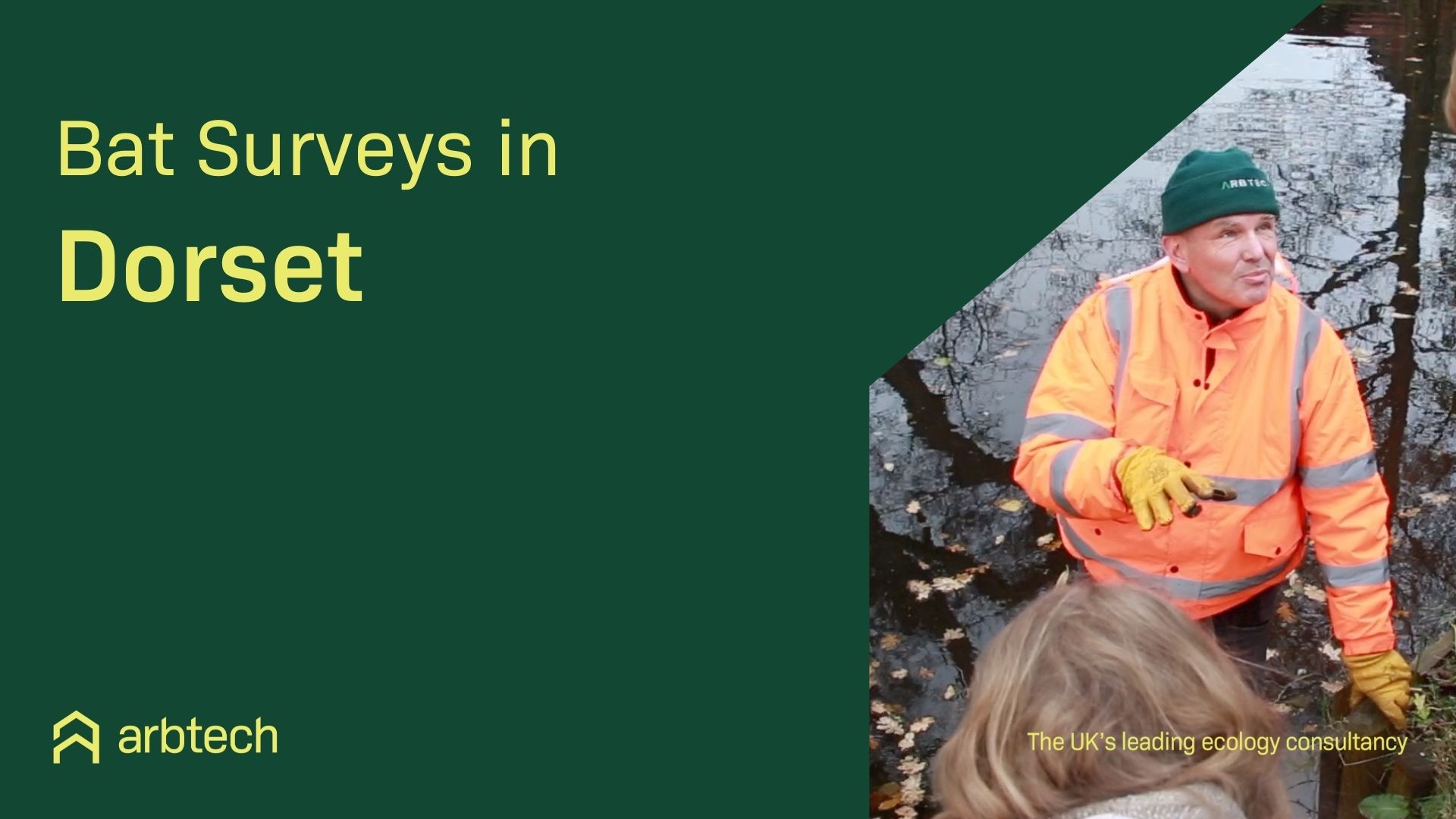 On this page, you can find out all about bat surveys for securing a successful planning application in Poole and Dorset.

Bordering the English Channel Coast, Dorset’s municipal authority areas include Bournemouth, Christchurch, and Poole and Dorset. With tourist attractions like Corfe Castle, the Jurassic Coast, Durdle Door and Lulworth Cove to name just a few, it’s no wonder Dorset has Areas of Outstanding Natural Beauty (AONB) and a variety of nationally important landscapes. The county has the highest percentage of conservation areas in South West England and is wildly held to be the ‘wildlife capital’ of the UK. This is because the scope of associated species and their habitats is exceptionally rich, taking in more than 80% of all British mammal species, 70% of butterflies and nearly half of all bird species. The UK’s most abundant grid squares for mammals and vascular plants are also both found in Dorset’s AONBs.

Biodiversity is a fundamental determiner of what constitutes an AONB. Dorset is remarkably rich in certain habitats and species: lowland heathland, meadows and forests especially. Cranborne Chase, for example, covers 380 square miles and offers a variety of habitats for many animal species, from the brown hare to goshawks and butterflies. It’s also relatively free from light pollution and is designated as an International Dark Sky Reserve, which is very important for wildlife that can be easily disturbed or even permanently dispersed by light pollution, e.g. bats.

Bats in Dorset: What Do You Need to Know About Dorset’s Rarest Bat Species?

Dorset’s climate being warmer and gentler than most of the country provides an excellent climate for bats. An exceptional county for bats, boasting all 17 breeding bat species native to the UK, Dorset’s Chiropteran inhabitants include the noctule bat, serotine bat, common pipistrelle bat, soprano pipistrelle bat, and the Daubenton’s bat.

The noctule bat is the UK’s largest bat and one of the earliest to emerge, often before dusk. It has a large wingspan so flies fast and high in search of food during the night. Another large bat is the serotine – the second largest species present in the UK. It is most regularly found in roof spaces, gable ends or chimney breasts. Although common in the county of Dorset, it is not present in the north of the UK.

The Daubenton’s bat is a medium-sized bat and is also known as the ‘water bat.’ It can be seen skimming gracefully within a few inches of surface water. There are 15 confirmed bat roosts in Dorset, mostly in trees and stone buildings.

The pipistrelle bat is the smallest of the species present in the UK, but the most common with an estimated population of two million. Like the serotine bat, it is also one of the most recorded bats in houses. It has a habit of squeezing between roof tiles without homeowners being aware they are even there.

Developers: How You Can Avoid Delays and Promote Biodiversity

To help preserve the local bat population, the Dorset Bat Group play a key role to help document and protect the bats of the county. They carry out assessments, bat roost visits, and talks with the public raising awareness of the bats in the area and how to protect them. One programme, designed to help report the bats in the county, is the Bats in the Belfry project. This is part of Open Air Laboratories Network, working alongside Dorset Wildlife Trust’s Living Churchyards for the Benefit of Wildlife. Over 100 parishes are involved in the project, many of which are located in urban areas where bats have never been recorded. On a broader scale, Natural England regulate European protected species across the country, and the Bat Conservation Trust focuses solely on bat species.

Okay. I Need a Bat Survey. What Do I Need to Know?

If you’re intending on carrying out building, renovation or landscaping work, you can do your bit to help protect the bats of Dorset by having bat surveys carried out by a professional ecologist. Applying to private, residential and commercial developers, this will also go in your favour towards any planning permission you may require. The bat surveys will consist of a phase 2 survey (Preliminary Roost Assessment (PRA)) where an ecologist will come and do a walkover of the area in question and check for any signs of a bat roost. This includes looking for droppings, remains of prey and small cavities or holes in buildings, roofs or trees they can crawl into.

I’ve Had My Preliminary Roost Assessment Done – What Next?

If there is evidence of bats present, this will then prompt a low cost bat survey known as a phase 2 bat survey (Bat Emergence Surveys or Bat Emergence and Re-Entry Surveys (BERS)), where the ecologist will come out inside of the seasonal constraints between May and September at dusk or dawn and monitor whether there are any bats flying in and out of the location. Monitoring will be done with the naked eye and the use of echolocation equipment to listen for the sounds of bats feeding, infrared and thermal imaging cameras.

Who Can I Contact About Bat Surveying in Dorset?

If you suspect you may have a bat roost in your home or garden, why not give one of our experienced ecologists a call? Our senior consultants Joe Slade and Natalie Evans are based in Dorset and Hampshire and will be more than happy to offer their advice, provide information on protected species, bat activity surveys and the bat survey process, and fulfil the necessary survey requirements. They have undertaken thousands of bat surveys between them – as well as other ecological services such as European protected species surveys, such as for great crested newts – and never failed to help a client secure planning consent.

As our ecologists offer bat surveys and various other ecological services, the right place to start would be through calling us directly, filling in the quote form at the bottom of this page with further information about your project, or choosing from the other communication options on our ‘Contact Us‘ page. We can then advise you at an early stage to benefit your works schedule, offer you a quote based on our affordable prices for bat activity surveys and other required services before booking in a suitable time to visit your site.