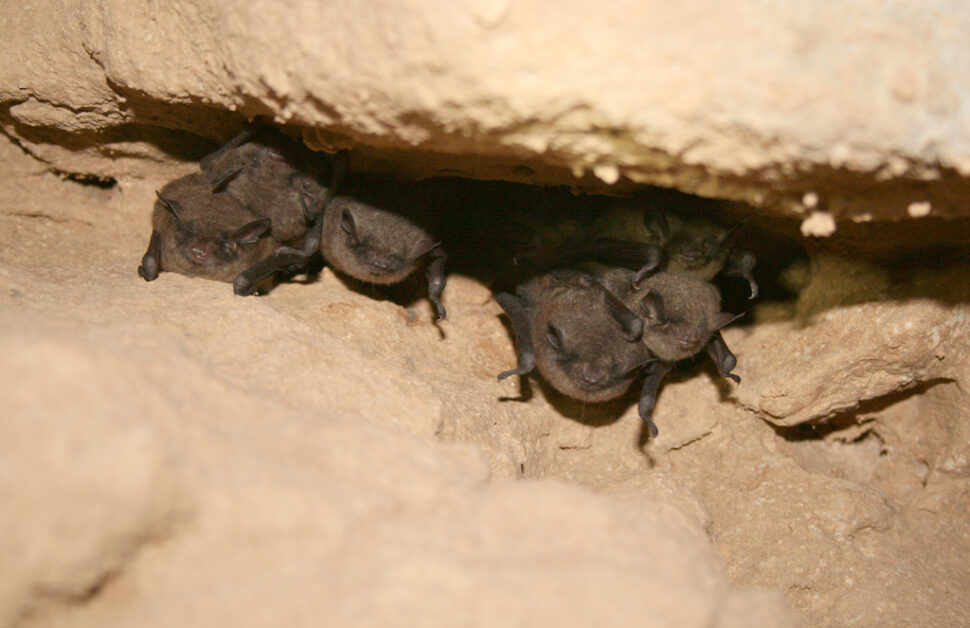 This article will teach you everything you need to know about British bats. You’ll learn how and why bats ‘see’ in the dark, and how to ‘listen’ out for them. You will learn about interesting things like echolocation and the mechanism Chiroptera (bats) have evolved for detecting prey.

In monochrome rather than in full colour, bats can see as well as humans. However, research shows that bats have evolved to make use of the cover of night in order to predate on flying insects—their main prey.

This has the added value of not disclosing their whereabouts to both prey and predators, though, even for an animal with excellent colour vision, hunting at night is difficult.

For a bat, monochrome vision alone is not going to cut it. In consequence, many bats – particularly those in temperate climates and especially those in the UK use echolocation, a kind of natural sonar, to locate prey and get a view of the world around them.

Bats emit echolocation calls (produced either from their nose or mouth), and as with some modern technological devices such speed cameras, or radar, the time taken for the wave emitted to be reflected back allows bats’ brains the interpret the world around in three dimensions, even enabling them to accurately judge distances to such fine tolerances that they can catch insects on the wing – if you’ve ever tried to swat a fly in mid-air, you know this is no mean feat.

This ability provides them with much in the same advantages that forward facing eyes produce, in daylight of course, through a phenomenon known as stereoscopic vision in e.g. humans. As with all things in nature, predator and prey are locked in a constant battle to out gun one another.

All British bats have echolocation to ‘see’ in the dark, however, in response to this, many insects have evolved to ‘listen’ for this echolocation signal, and once they have detected it, can flee from danger.

In response, both the brown long eared bat (Plecotus auritus) and the Barbastelle (Barbastella barbastellus) species have developed a softer, quieter echolocation call, which cannot be detected as well by the insects, so providing them with the advantage.

At least, until the next evolution of insect defences against predation by bats. Humans of a very young age can sometimes hear these calls, though by adulthood most have lost this ability.

Normally, bat calls are identified by using a bat detector, which converts the echolocation call into a sound that we can hear ourselves, and so use such information for scientific study and conservation purposes.

Detectors such as heterodyne, frequency division and time expansion, all alter the sound wave in different ways, so are usually recorded for proper identification using computer software at a later date, unless your surveyors are particularly experienced and can identify them simply from the call alone.

There are 17 species of bats in the UK, but most people will never catch a glimpse of one. They are so hard to spot because they are only active at night time and they hibernate during the winter months. The best chance we have of spotting them is around dusk or dawn between the months of March and November.

If you are ever lucky enough to spot a bat, you’ll probably struggle to tell them apart, so here is a guide to help you identify British bats.

If you see a British bat, chances are that it will be a Pipistrelle. Around 75% of British bat sightings are Pipistrelles. The Pipistrelle bat species are the smallest bat in the UK. They have small bodies, short hind legs and short, wide ears. They have brown fur on their backs and dark brown / black ears, nose and wing membranes.

This bat is the latest addition to the UK bat family and is very similar to the whiskered and Brandt’s bat species. This is a small bat with reddish-brown fur. It can usually be found in deciduous forests near water.

Barbastelle bats are a rare and distinctive bat. Its upturned nose gives it a pug-like appearance. This bat lives in woodland and forages over a wide area.

One of the UK’s rarest bats. This bat lives in woodland and roots in tree crevices.  They are found around southern England and south east Wales.

This bat is found throughout Europe and parts of Asia. This is another bat that is very similar to the whiskered bat.

This bat has large distinctive ears and has amazing hearing. It is found throughout most of Europe and roosts in buildings, trees, caves and bat boxes.

This is a small to medium sized bat found throughout Europe and parts of Asia. These bats fish insects from the water’s surface using their large feet or tail.

This is a medium sized bat, also known as the ‘hairy-armed bat’ due to the hairy undersides of the arms.

This bat has brown fur with a greyish white underside. It has broad wings which enable it to fly slowly so that it can prey on a wide variety of insects.

Noctule bats have long narrow wings and they fly very high and fast. They can be found throughout Europe, Asia and North Africa. This is the largest British bat, but it can still fit in the palm of your hand.

The Serotine is a fairly large bat with broad wings and large ears. They have long brown fur with yellowish-brown undersides.

Whiskered bats are slightly smaller than Brandt’s bats and have very similar fur.

Where can I learn more about UK bats?

A great place to learn more is from the Bat Conservation Trust website. You’ll be able to learn more about our amazing UK bats and also find out how support these amazing creatures.

The Nuts and Bolts of Biodiversity Net Gain (Infographic)

By Robert Oates on 11th May
Rob's Blog

By Robert Oates on 26th April