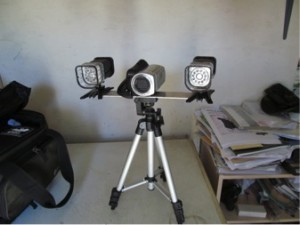 In 2013 attended a workshop at the National Bat Conference on infrared digital image capture of bats with a quite prohibitively expensive, integrated system.

On the way home, reflecting on the benefits of such a system for a variety of ecological surveys, and having thought about the actual set up a lot, I resolved to I talk to colleagues and get their feedback. That done, and with the go-ahead from Rob to splash a little company cash; so set about researching, setting up and testing our own rig.

Most of the rigs I had seen to date have relied on external batteries and lots of connecting leads; which is clearly not very practical for site surveys at night or in poor weather. Although the footage from these rigs was of a good standard and the systems were fairly simple to set up, I was looking to build a rig that would be completely self-contained.

After some considerable research, I stumbled upon a type of infrared light called a bullet, produced by IR specialist component manufacturer SpectIR ®. The bullets take re-chargable AAA batteries and so can be powered without access to a mains supply: ideal! The added bonus was that they are manufactured in the Far East and therefore, are stunningly cheap at £19 each.

With roughly 4 hours of continuous use and a range of approximately 20m, they are more than adequate for any bat emergence survey I have tested them on. The limitation is the SD card memory in my camera rather than the rig itself.

The fruits of my labours

The footage below is of a Brown Long Earned Bat (Plecotus auritus) at the end of the clip emerging from a bat box, formed part of roost camera test #07 and was filmed in Luton, Bedfordshire in April 2013.

I have now used the infrared camera rig for a full bat season and thought a review of our long-term test was in order.

So, during the first few emergence surveys with the new rig, it yielded surprising results. If I’m completely honest, what I’m about to say puts our industry’s best practice to shame.

So here it is:

Without the system, emerging bats would have been missed.

For the non-ecologists out there, that might not sound like a bombshell. But believe me it is. It essentially means that there is a very good chance that by not using the system, as in the case of 99% of bat emergence surveys where only a detector and the mark-one eyeball are employed, buildings have been demolished and trees felled that were home to roosting bats.

I set up another test: man vs machine

The site in question was a small barn where we had previously recorded common pipistrelles (Pipistrellus pipistrellus), and during a scoping bat survey, had found droppings from a brown long eared bat (Plecotus auritus).

Both another surveyor and myself performed the emergence survey, and deployed the new rig as well. The pipistrelle activity was confirmed by the other surveyor, but no brown long eared bats were sighted or even detected by either of us.

The infrared rig however, captured two BLEB emerging from a tiny gap at the top of a former chimney; confirming their presence.

We were genuinely taken aback because although we had been in and out of the barn on several occasions, nothing had been heard on the detectors or been seen with a red light – and we were very thorough!

There minor issues with the setup we had originally. The first is the range the infrared lights emitted. This was easily solved by getting another tripod and light, placing it just behind the emitted range of the lights next to the camera, thus extending the range of the system, though increasing the cost.

A second minor issue is that it works rather better internally, than externally. Again this was due to the limit range of the IR lights that are used, but with the addition of yet more lights, the problem was solved.

Finally, we significantly upgraded the camera choice, now opting for Sony’s HDR HC3, which currently retails on Amazon for a shade under £400.

In summary Arbtech will be continuing to use the infrared cameras as often as practicable, as the evidence is invaluable. If nothing else, you at least have some hard evidence to demonstrate to your client why they need to delay their project and spend £x on mitigation and licencing.

I really hope you enjoyed reading about the infrared bat survey rigs. Please feel free to ask questions or leave comments below; and of course, the whole purpose of this kit review is to share knowledge within our industry, so please use twitter, Facebook and any other method you like of sharing this among your colleagues and friends. 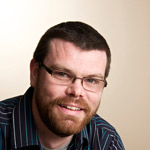