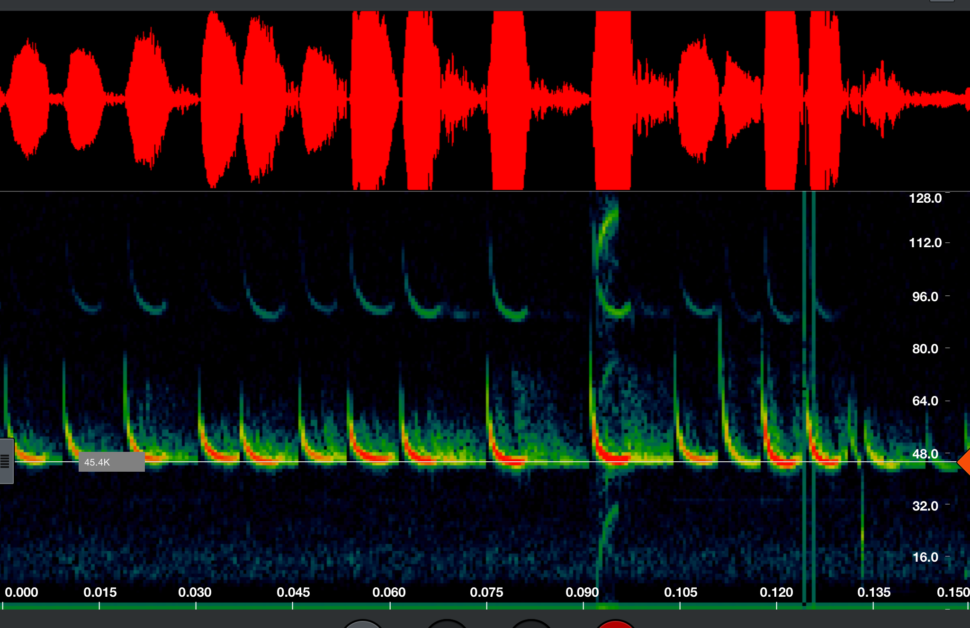 Keenly interested in new technologies, I was intrigued. After speaking to a Wildlife Acoustics rep about our team’s use of the EM3 devices (we have five) for the last year, I could immediately could see the advantages of adding the Touch to our armoury.

The Touch itself is set-up to work with Apple’s iOS operating system; thus it is limited to a few Apple devices. You can follow this link for a full list of compatible devices.

After discussing the upcoming release of the product with the team, we resolved to order one and I would field-test it, before deciding if it was worth rolling out to the rest of our ecological consultants.

I ordered mine from Envisage Wildcare to put to the test on emergence bat surveys. When it arrived I was quite excited and also quite surprised. It was a lot smaller than I was expecting! I guess I am used to bat detectors being bulky, cumbersome things. In time I suspect we’ll come to view them rather like the first mobile phones in the 80s that look almost comical now. 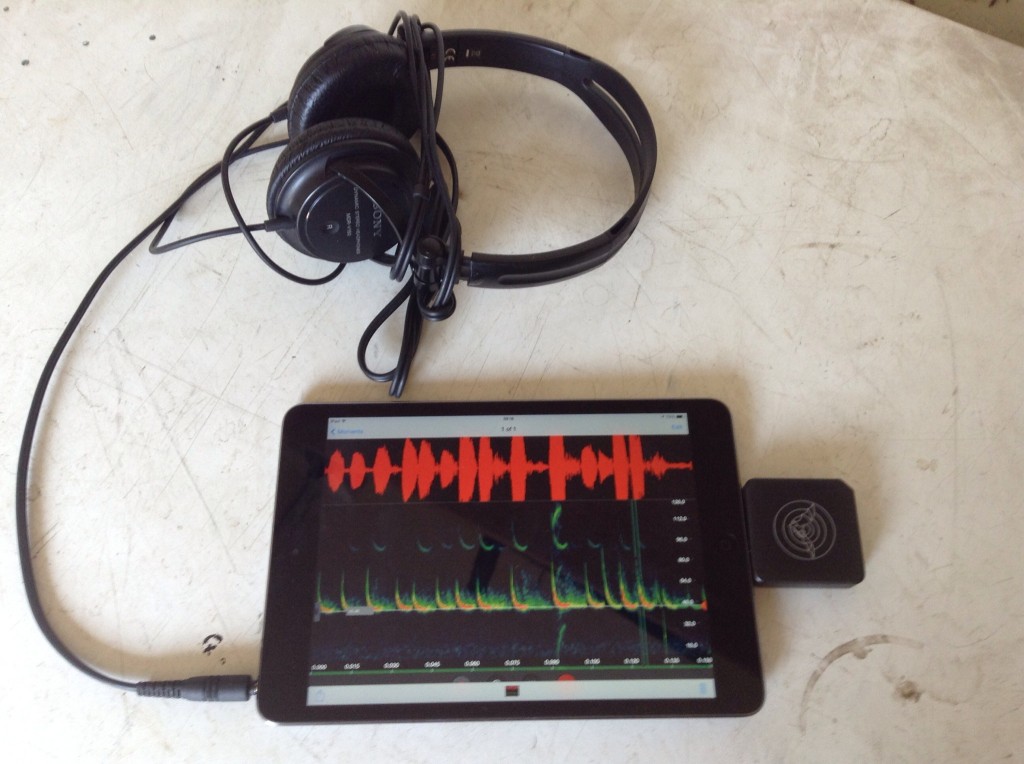 Tiny piece of kit compared to an EM3, etc. (Dirty table was at the site being surveyed, not at Arbtech towers!)

For the tidy sum of £450 (inc VAT –- for all you non-VAT registered bat enthusiasts out there!), you get a microphone that is about 3 inches square and can be plugged into your compatible Apple device: turning your iPad mini (retina display only folks), or 4th gen iPad (Arbtech’s ecological consultants have both), into a badass bat detector. Note: compatible Apple devices are sold separately and start from about £350 (inc VAT).

You then need to use the App Store, simple enough (it must be if I can do it) to download the Wildlife Acoustics app onto your device.

So, I downloaded the app to my iPad mini, plugged in the Touch’s microphone unit and rubbed my fingers together. I should probably explain that last bit: rubbing your fingers together produces a sound outside the range of human hearing, thus allowing you to ‘test’ a detector is functioning.

The app itself is very intuitive and very easy to operate, a big plus for those of us who work in the dark! Four simple icons: start, record, auto ID and compressed or uncompressed mode. There are of course background settings that you can play about with, such as altering the sample rate, contrast and brightness; all of which can be controlled to one’s own taste.

There is also an in-app purchase of a further feature: Kaleidoscope Pro, which effectively is a bat species auto-ID upgrade. At the time of writing this was $149 = roughly £90.

Personally, I think is cheating and is of somewhat questionable value. But, I should stress I haven’t opted to try this yet and am keeping an open mind (we will update this review once we’ve had a chance to test the Kaleidoscope Pro feature).

Back to the finger test

I was quite pleased to find a nice long sonogram and oscillogram appear on the screen (after rubbing my fingers together). One of my irritations with the EM3 was the small screen size but with my iPad it’s no longer an issue!

Before updating this section, I’ve used the Touch for almost a month ‘in the field’ and thus far it has been pretty good, it has to be said. I would describe myself as a ‘visual’ person, so I really don’t think I could now go back to a standard detector.

Another big bonus with the Touch is that it uses the same microphone technology as the BatBox Duet (we’ve literally got gazillions of these at Arbtech – we give them to all our sub-contractors). The ‘listening technology’ employed in a Duet is much more sensitive than whatever is in the EM3, in my experience anyway, so I find that the Touch is much better at picking up the distant echolocation calls of bats than the EM3 is – a real help in the field.

The picture below is screen shot of an echolocation call for a common pipistrelle Pipistrellus pipistrellus, taken in the field. You can easily see that the bat comes overhead, gets closer, then flies onwards, just from the intensity of the call! In the field screen-shot of my iPad using the Touch to display a common pipistrelle call. If you can make it out; note the harmonic at 90khz and intensity of the call (red) at 45khz.

Here, a myotis call can be seen, below. It clearly demonstrates just how good having a bigger screen is (and maybe that the Auto ID function isn’t such a bad idea after all!). 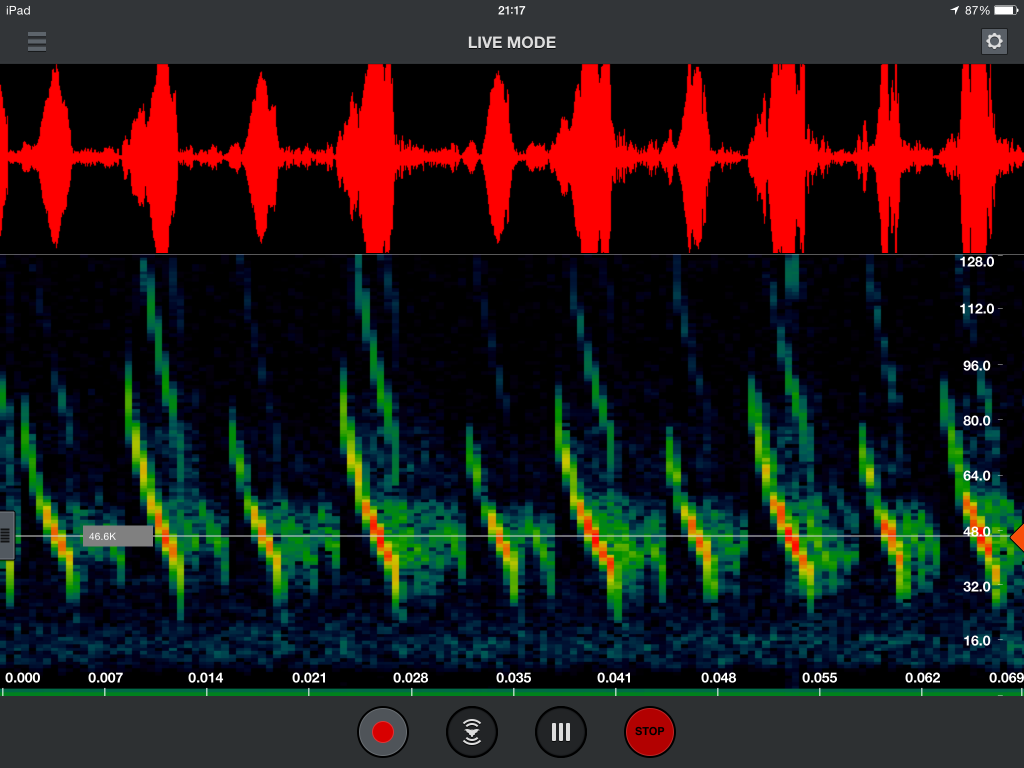 A myotis species of bat. Note that unlike the pipistrelle call, the myotis call has no ‘peak’.

As much as I like the EMT there are a few minor issues that I have discovered. In compressed mode (the normal operating mode), the screen is meant to move from right to left as a bat passes-by. This does happen, but not always. On occasion the software seems to have a gremlin that prevents this. It is a simple fix: just remove the microphone unit and plug back in. But that’s not a lot of help when you’re listening to a bat that’s actually flying overhead!

A couple other points worth mentioning

Make sure that if you are using an iPad mini that it has a retina display (I had to get a new iPad as Arbtech issues non-retina display iPads to team members as standard).

The iPad mini is more than big enough, having used both a mini and a normal display.

Overall the Touch is an awesome piece of kit and no doubt Wildlife Acoustics are already planning or working on upgrades to make it even better!

I really hope you enjoyed reading about our new favourite toy. Please feel free to ask questions or leave comments below; and of course, the whole purpose of this kit review is to share knowledge within our industry, so please use twitter, Facebook and any other method you like of sharing this among your colleagues and friends.

Arbtech have been so impressed with the Touch that we have ordered 5 more (and 5 new iPads to go with them). The rollout begins.

We are going to build a database of sonograms and oscillograms for different bat species an publish them online for anyone to use and learn from. If you would like to contribute to this, just tweet your screen shot to @SuperFastSurvey, or mail it directly to cf (@)arbtech.co.uk – remembering to remove the parentheses! We’ll credit you as the owner of the image and if you wish to write anything to provide some context, we’ll include that too.

This has, thus-far, ironed out the minor gremlins e.g. the occasional freezing screen and the sonogram not moving from left to right as a bat passes you. I am yet to try the kaleidoscope auto-ID software, but will be downloading this very soon and will update with my thoughts once it has been field tested.

Next update will be once version 1.1 comes out – which Nicole at Wildlife Acoustics tells us will be a very big update! Can’t wait..